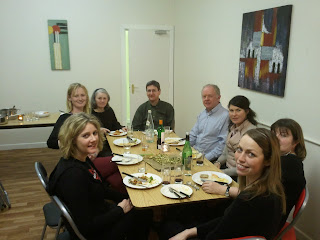 Our last meet up was a gastronomic tour de force, so kudos Clare Veg Members for rolling up the sleeves in your respective kitchens. I’m still dreaming about the vegan walnut bread, which I took home and toasted for breakfast. Almond butter on top was a fine idea.
In terms of turnout, the result was great too, with ten people rocking up with vegalicious vegan dishes.
Here’s a list of the fruit of our culinary skills:
Tofu Korma with boiled rice - Julie
Vegan Courgette Flan – Julie and David
Corn-chip-topped vegan lasagne and walnut bread – Ronni
Vegan scones with uber-pretty mini jam pots, plus vegan butter and vegan flapjacks - Joanne
Masterfully crafted vegetarian and vegan sushi – Lucia
Stuffed tomatoes with coriander and yummy ginger drink - Conor
Mango and blueberry… tart? A nonetheless tasty effort – Audrey
For our next meeting, we’re thinking of going with a theme, perhaps seasonal dishes only, or all green – considering Paddy fever has us all gripped?
Emails with suggestions are welcome, even more so before the newsletter goes out at the end of this week.
Posted by Julie at 4:41 AM 1 comment: 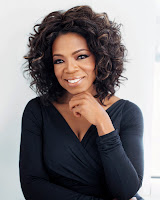 Recently one of the world's most influencial and powerful celebrities and chat show host legend Oprah Winfrey and 378 of her employees pledged to go vegan for 7 days. The 7 day vegan challenge was supported by vegan and author of Veganist, Kathy Freston. Kathy helped staff throughout the week including Veronica, the co-producer, who was struggling with the challenge. Veronica was a heavy fast food eater and said she was feeling 'angry' with her change in diet. Kathy chatted with her and explained that what she was going through was withdrawl symptoms of a long addiction to fast food. Veronica perservered and after the 7 days, felt so good she wanted to continue for 21 days!
Three days into the challenge the video editor, Rich, said he was feeling better than he had in ten years and by the end of the week had lost 11lbs. Staff and their familes were given cooking lessons by Kathy also.
Aswell as raising awareness with regard to food, the staff will continue to have Meatless Mondays in the cafe. According to the Oprah site, a record amount of toilet paper was used in the week ;) Info about the challenge, Kathy Freston, interviews and cooking lessons can all be viewed on http://www.oprah.com/oprahshow/Oprah-and-378-Staffers-Take-a-Vegan-Challenge
Sign Co. Clare's campaign for Meat Free Mondays on  http://www.gopetition.com/petition/42290.html
Posted by Julie at 3:07 PM No comments:

I recently lunched out in New Market. We went to the Cafe Fergus. They are very accommodating there and the cooking is so so yummy. The menu is of course geared towards lunch time but they have hot meals too! I had the baked potato with Mediterranean roasted veg with optional cheese and sour cream accompanied by a delicious garden salad. I am not sure about the Vegan side but I am sure they would accommodate.
On another day we had the veg salad (take-away) which had everything from sun-dried tomatoes, crutons, lettuce, carrot, cucumber, red onion and more. It was drizzled with a subtle vinegarette dressing. All served with (still hot from the oven) wholemeal brown bread. For only €4. Cheap and cheerful. Have and will revisit.
Posted by Julie at 10:57 AM 1 comment:

A health warning has gone out to parents to keep their children out of shopping trolleys containing raw meat - even if the meat is double bagged. Infant exposure to raw meat can, according to the surveillance group working under the auspices of the HSE, increase the risk of non-typhoidal salmonella, especially in children under three months.


Salmonella infections affect the intestines, causing vomiting, fever and other symptoms. Salmonella is a foodborne illness caused by the salmonella bacteria carried by some animals. The type of salmonella most commonly associated with infections in humans is called nontyphoidal salmonella. It is carried by chickens, cows and reptiles such as turtles, lizards, and iguanas. The HSE has cautioned parents that reptiles such as those listed are not suitable in homes where there are young children.


The health surveillance group has also said that breasfeeding, because mother’s milk is the safest food for young infants, is a good way to protect against infection.


Although salmonella is generally on the decrease in - between 2007 and 2009 the number of cases fell from 456 to 333 - instances remain alarmingly high in children aged 0-4 years. Infantile salmonellosis is a serious disease as bloodstream infection is more likely to develop.


Salmonella is also a leading cause of intussception, a medical condition in which part of the intestine folds back into another section of the intestine, often resulting in an obstruction.


Please pass this article to parents with young children, especially those who regularly buy raw meat from supermarkets.
Posted by Julie at 2:45 AM No comments: